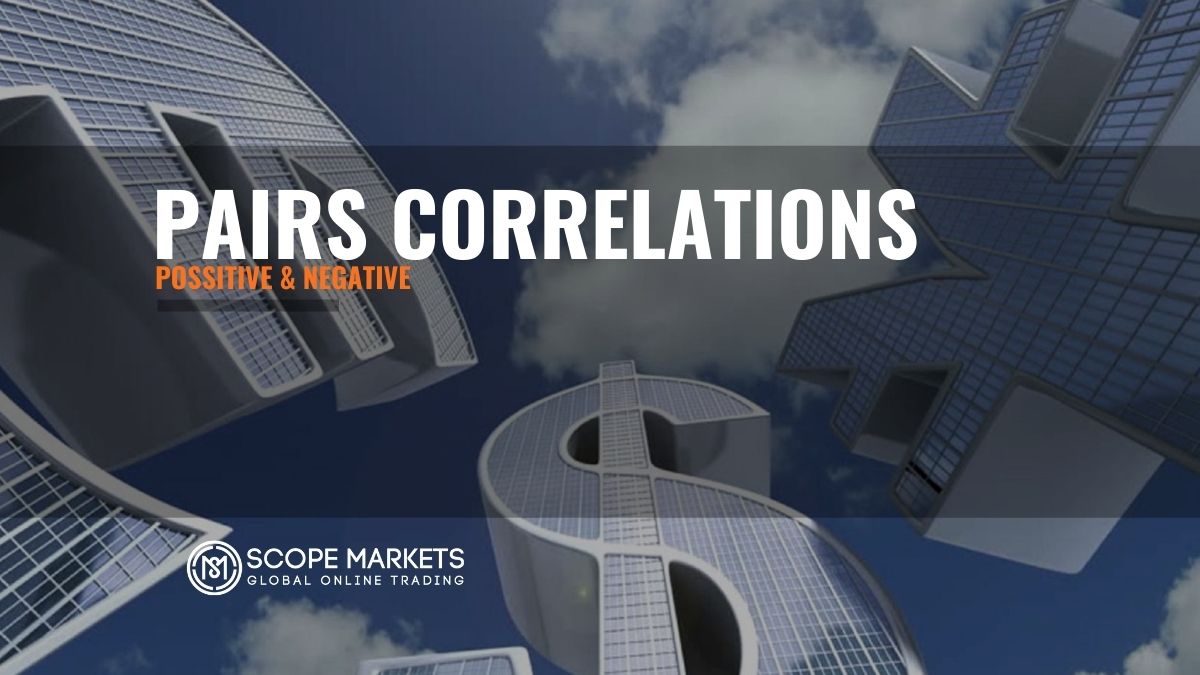 Correlation is an analytical pattern of the relation among 2 securities or assets. And, the coefficient of correlation varies from -1 to +1, and sometimes varies from the value -100 to 100.

A definite currency relationship stays between diverse currencies or securities. It’s when they tend to shift similarly. The reverse is valid in the conditions of the negative exchange-correlation.

The most highly correlated currency exchange pairs are generally those with close financial ties. For example, GBP/USD and EUR/USD are often easily correlated due to the close association between the EURO and the Pound – involving their topographical closeness, and their position as 2 of the world’s most extensively-held reserve exchanges.

The Forex market includes trading currency pairs to generate profit from their moves. This is the largest and very liquid market all over the world. And, currencies are generally clubbed in currency pairs that a forex trader may buy or trade. Being said that, it means a trader is buying or trading a pair and not a currency.

What to Know About Currency Exposure?

If you are going through this post, then you wish to grow as a prospective Forex trader.

To perform this, you must understand the basics of the Forex trading as well as key factors pushing it. All Forex traders need to handle the alleged currency disclosure or exposure. It is if they wish to generate profit and ignore severe losses. As currencies involve exposure to different factors that impact their market rates. There is a pressing risk arising due to exposure.

When forex traders are pointing to the positions they own or they wish to open. Then, they are stating that they purchased Euro or the USD. When in certainty they purchased the Euro against the different currency.

Such a difference is important because the Euro as a currency can trade mix on any provided day. With EUR/JPY and EUR/USD pairs going downwards and EUR/GBP going upside.

It refers to currency pairs. Yet, currency pairs trade depending on different correlation degrees. These pairs are with each other and with different financial markets too. Traders can trade currency pairs in crosses and majors. And, this is the key categorization. Trading a major pair is somewhat different when trading a cross pair. Understanding that helps a trader to position strategies’ viewpoints and the profit anticipations.

Now, you understand what it is, how it works, and what circumstances influence it. You may use it for your profit and control risk and stay ahead for the later steps. So, here are a few significant rules of trading currency correlations.

To say, these are the EUR/USD and USD/CHF pairs. If you move back, you would find that these pairs, most of the time shift in reverse ways. In use, this signifies that you would not generate profit by trading these currency pairs.

You may use the correlation of currency to hedge and maintain risks of buying too many positions. And, that’s of a similar exchange pair and you get adverse results. Since you know, the AUD/USD and EUR/USD exchange pairs have a powerfully positive relationship. Thus, you may make use of them to cover the risk.

Make Use of Pips

To start with, a pip is a base price change in an exchange pair. To tell you how to make use of them, let us consider an example – the currency pairs such as USD/CHF and EUR/USD.

Their relationship is very powerful but clashing. Yet, the move of PIP for 100, 1000 units of both currency pairs is quite comparable – that is $9-10. Thus, you may use the USD/CHF pair to control the currency appearance of the pair EUR/USD.

Currency or exchange pairs are oftentimes related to moving diverse markets. Also, there are different correlations a trader should consider. These correlations hold both pairs of currency along with different economic products. And, here are some essential tips on trading pairs and what to think about making a profit.

As described above, trading majors and crosses is an unconventional thing. And, a trader should think of the fact that for any major pair, there is a cross that is affecting the way it’s shifting.

To explain that, let us consider an example. And, for this we are going to suggest the GBP/USD and EUR/USD (thus, 2 major pairs) and an identical cross, that is EUR/GBP. Knowing what’s the identical cross of these 2 major currency pairs, is to cut the US dollar out of the comparison. And, the outcome is the currency pair EUR/GBP pair.

Economic issues that affect these exchange pairs arise from the Eurozone, the US, and the UK. Any financial news can affect at least 2 currency pairs rather than these 3. But, there is a method to trade them in a related way. And, that’s when the USD is shifting or when a USD inspired trade event is going to hit the lines.

On any USD currency movement, the GBP/USD and the EUR/USD major pairs would move similarly. If the ratio is similar, then the EUR/GBP currency cross would be too flat or shift not much. Beforehand an essential forex event out of the US, the method to trade is to buy crosses. Also, allow the major currency pairs to do their thing till the news comes.

In this plan, one is ignoring the volatility of investing in the USD event. Thus, administers that risk, and trades a pair that’s not assumed to shift too much.  But, a trader can suppose to consider ranges. So, trading with the support of an oscillator to find out and oversold and overbought levels. And, should follow the method for secure returns.

Correlation Between JPY Currency Pairs and the U.S. Equity Markets

There is a close correlation among the JPY pairs and the equity markets in the U.S., S&P500 and the Dow Jones indices. Before, this relationship was so powerful. And, that for every 2 points the Dow Jones shifted, the USD/JPY pair shifted single pip too.

Nowadays, this relationship is not that powerful. But it’s when there are no financial releases to affect trading. Traders understand that this is a very tough relationship to trade. Since one is taking an unfavorable choice when a USD event is occurring. If the event is in a bullish position for the $, one must buy the pair USD/JPY and trade or sell the equity ratios.

On the mark that the Fed Reserve of the US would approach and increase the charges.

Increased rates are contradictory or negative for stocks. Yet, a bullish position for the exchange and the reasoning above is thoughtful. Still, this reasoning is often disclosed by the close correlation discussed earlier. Thus, trading these 2 markets on a USD inspired event is critical.

The Canadian market is reliant on what is taking place in the oil market. And, it’s because of a huge dimension of its GDP partner to the oil business. Many factors affect the Canadian dollar.  And, they are oil prices, manufacturing levels, and demand/supply delays.  Thus, the USD/CAD currency pair, which is the major one and shows the CAD the most. Any decisive news for oil must match with an essential Canadian Dollar.

So, a weaker USD/CAD shift must follow. Whereas an oil unaffirmative news must occur in raised USD/CAD points to understand. These are relationship examples among currency pairs or pairs and different markets. And, they’re much confirmed nowadays since they were strong some years ago too.

There are various things to know, such as risk-on and off surroundings. But, these left recently due to the interest rates in major markets are much different.

The information on the currency relationship part can also assist trades with managing risk. There may be instances where traders increase their risk without even understanding it. Effective risk management also counts those exchange pairs which associates as well.

Knowing these correlations beforehand creating a trade on the Forex market is important. Furthermore, it is creating the difference amid being a powerful trader or not.

If you wish to be the best forex trader, you must have a deep knowledge of the international currency market.

In the end, currencies are expansive and different factors impact them on a regular base. The most essential thing, yet, is to find out how various currencies respond to each other. That’s where the correlation of currency comes into play.